My little brother & I took a photo of an alien!

Actually, it was an Unidentified Flying Object. And this story is 100% true—since we were never able to identify that flying object. But we saw it: a UFO. And it freaked us out.

It was the summer of ’76. We were living in a ranch-style home in Durham, NC. My bedroom had wallpaper with a brown nautical theme—old drawings of sailing ships, a compass, a steering wheel, a telescope, repeat, repeat, repeat… The kind of wallpaper designed for kids who loved Robinson Crusoe and pirates. We were not those kids. We loved spaceships.

Star Wars wasn’t out yet but we loved Star Trek and the Twilight Zone and any goofy space-themed comics we could get our grubby hands on. I even drew my own comic, “Defenders of the Universe,” which featured the thrilling space adventures of Captain Argo as he fought his nemesis, Mr. Vendezvous. You know, to save the galaxy.

Anyway, we were in my room one night, discussing just how many lizard-people with just how many giant styrofoam rocks it would take to actually kill Captain Kirk, when we saw a strange glow out the window. Up in the sky was a cluster of lights. We thought it might be a helicopter. But it darted quickly left and then right again, too fast for a helicopter.

“A spaceship!” I shouted as I reached for my camera on top of my messy dresser. A Kodak Ektralight 10, which I kept loaded and wound for action. Because if anything interesting ever happened in Durham, NC, I didn’t want to miss it.

This was it! I grabbed my trusty camera off the dresser but the strap caught on a Loony Tunes glass. I yanked it free, spraying Kool-Aid through the air, the glass crashing against the Lego fortress-in-progress on the floor. I aimed my camera out the window and pressed the button. The flash went off, reflecting off the window, nearly blinding us. But we saw that UFO take off like a shot, over the lake and across the horizon, out of sight. It had seen us!

I spent my whole allowance getting the film developed at the mall. I told them of the importance of what was on that roll of film. “Do your best,” I told the teenager behind the desk. “One of those pictures is going to change the world—no, the UNIVERSE!”

A week later I got my pictures back. Flipped past the poignant shots of our dog Scooter sleeping in the kitchen. Past the shots of the spider we dropped into a bottle of moonshine we found in the woods. Past the rather artistic shot my brother accidentally took of his right foot. And found The Picture That Would Change The Universe!

But it was just picture of my window, lit up from inside by the flash, two hopeful boys staring out through their reflection at a limitless universe. 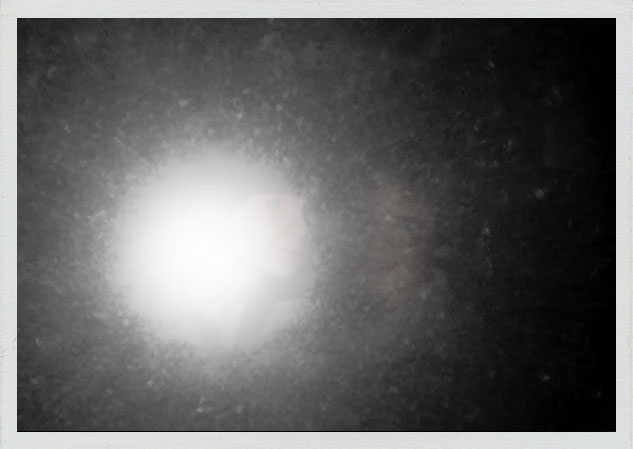 “My marriage counselor says I should grow some balls.”