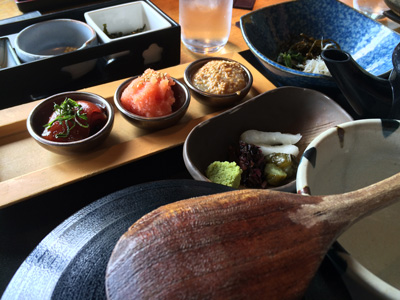 After a whole day of  we were famished! Hungry in Japanese is sashimi, right? Maybe not, but it should be. Our Japanese hosts reserved a private room for dinner: 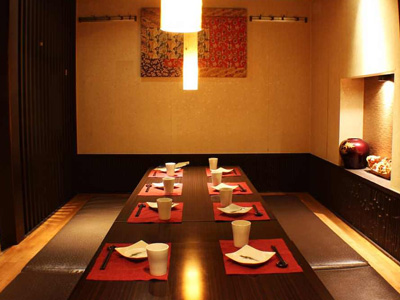 The private room becomes your stand-type digging so you do loose and relaxed.

So true! Every time you sit down to eat, at every restaurant in Tokyo, they give you oshibori — a warm towel or a wet-wipe to clean your hands with. So you do loose and relaxed!

And the sashimi was just as digging. The wasabi was different than I’d had before, much lighter in texture, almost grainy. One of ourJapanese hosts showed us how he eats it. He doesn’t mix it in the soy — he takes a pinch of wasabi with his chopsticks, then grabs the sashimi and dips it in soy sauce. The taste is more complex, since the wasabi and soy aren’t mixed. Try it! So loose and relaxed, you will be digging! 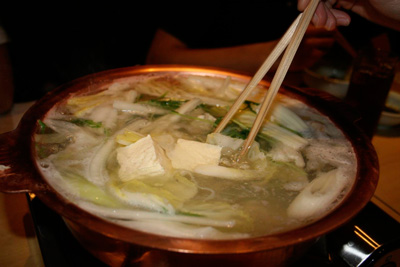 We also had shabu-shabu, which is a dish you cook for yourself at the table. They bring in a big bowl of piping hot broth and gint plates of vegetables and raw fish or meat. You grab it with your chopsticks and swish it through the broth back and forth — shabu-shabu — it’s an onomatopoeia. Also, it’s oishii!

And you know what they eat for breakfast? Japanese food! But they just call it food. 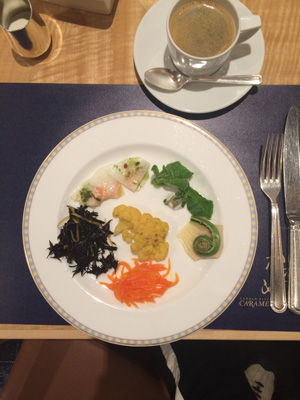 The hotel had a classy buffet — I know that sounds like an oxymoron but it’s true. On one side they had American food: scrambled eggs, potatoes, waffles, assorted meatpiles, killer French toast, fresh-squeezed OJ, homemade yogurt, even an omelet station manned by a chef. On the other side everything was Japanese: various pickled vegetables, seaweed salad, radish salads, even iceplant salad. Lots of things I’ve never had before. Most of which I liked.

This was a lunch I had, a bento (sort of) called kaisen:

You put rice in a bowl, then fish on top, then all kids of other tasty bizarreness, then pour tea over it. I wasn’t sure if I was supposed to eat it with the little wooden spoon or chopsticks, so I did the combo move, to make sure I was doing something right half the time. That’s just good policy. 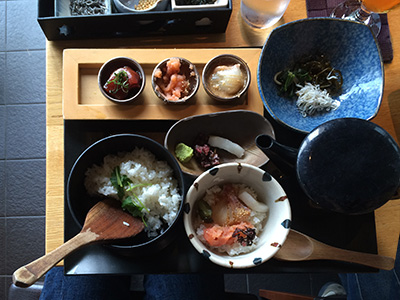 We didn’t have Japanese food the whole time. The night before a coworker was craving wine so we stopped at an Italian restaurant and had a delizioso Italian dinner, but you know what that stuff looks like so…  Oh, we also had dinner at the hotel where “Lost In Translation” was filmed… but that place is its own story…

Death in the middle of life: secrets of a samurai