That’s what the Pulitzer Prize-winning news source The Guardian calls John Waters. And I tell you what, he fits the bill. A filthy, charming old weasel of a man. Completely irreverent. Fresh out of fucks to give about what the public thinks is tasteful.

I had the pleasure of hearing him read at his signing event for Carsick, forty sassy sagas about what the 66-year-old “homo-hobo” hoped / feared / experienced on his hitchhike from way-out Baltimore to this here San Francisco.

“I’d like to praise the drivers who picked me up. If I ever hear another elitist jerk use the term flyover people, I’ll punch him in the mouth. My riders were brave and open-minded, and their down-to-earth kindness gave me new faith in how decent Americans can be.” –John Waters

I won’t tell the story he read because, quite frankly, it was one of those “you had to be there” moments that left the audience alternately laughing and gagging. Let’s just say there was a vegan nazi who literally scared the shit out of him. Get the book, you’ll see what I mean.

During the Q&A someone asked him what’s the weirdest signing he’s had to do. He said he’s signed a vasectomy scar, but never an ass scar. So, of course, this had to happen: 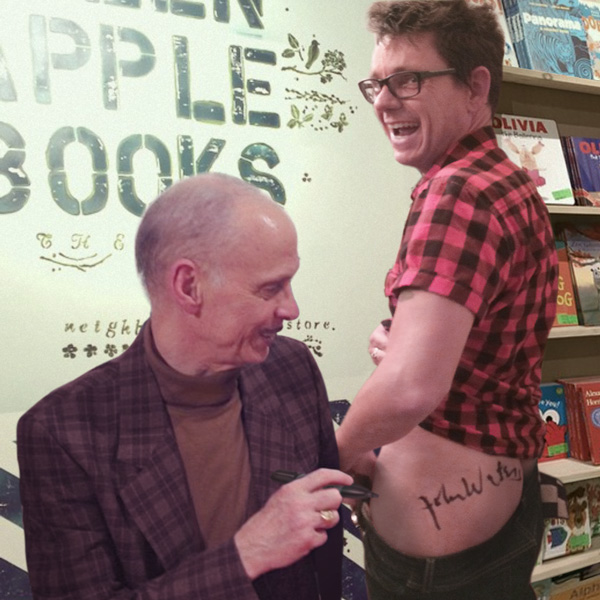 Love him or loathe him, you gotta admit: the world needs freaks. Roll on, Waters.