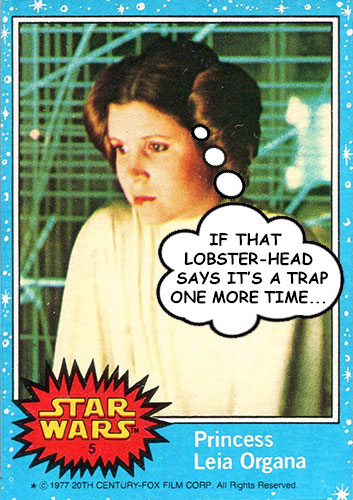 Everybody knows Princess Leia Organa but what about her dad, King Organa? Where the hell was he when his daughter was dealing with all that shit? I mean, jeez, she got grabbed by Darth Vader! C’mon, dad, show a little love!

NERD ALERT: Who you calling scruffy-looking? 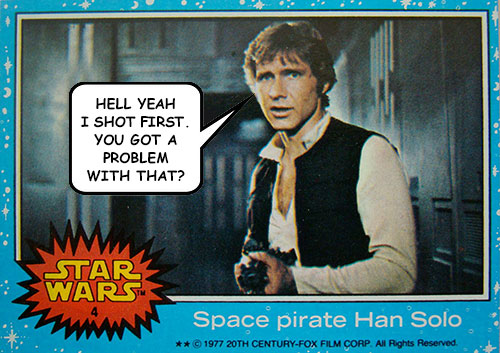 When I was a kid I  wished I could be like Han Solo—tough, cynical, devil-may-care… Now that I’m an adult(ish) I’m pretty good with the cynical part, but as for the rest? Sadly, I’m more or less just a “nice guy”. I mean, I was in rock bands and punk bands and all that, but I was the nice guy punk. Which is maybe a nice way of saying poser? Ouch! Whatever.

Even when I was a kid, I knew I wasn’t the tough guy type. My dad had the Beatles’ Let It Be and I thought John Lennon was just the coolest. But somehow I knew I was always more on the McCartney end of the spectrum. Or maybe Ringo.

The point is, we can’t all be Han Solo. Maybe that’s just how it works—there’s only so much bad-assery to go around, and the rest of us have to be the guy in the band who doesn’t bang the groupies. You are what you are. Even if you don’t wanna be.

But damn, I always wished I was a bit scruffier.

“Why, you stuck up, half-witted, scruffy-looking nerf-herder…”

So here’s to all the nerf herders… May you be as scruffy as you can.

NERD ALERT: Revenge of the Sixth!

See what I did there? Recycled that whole thing. If you’re ever stuck in a trash compactor on the detention level, I’m your man! Or droid. Or whatever.

The droids were one of the most awesome awesomenesses (yes, that is a word) of the whole STAR WARS nerdiverse (also a word, thank you). I’m gonna reserve judgement on that new BB-8 guy, to me he looks like half a mochi riding on a soccer ball. But I loves me some mochi, and soccer balls are okay I guess, so we’ll see.

I guess I just have a special place in my heart for the original Dysfunctional Duo, the Frick & Frack of the Force, C-3PO & R2-D2… 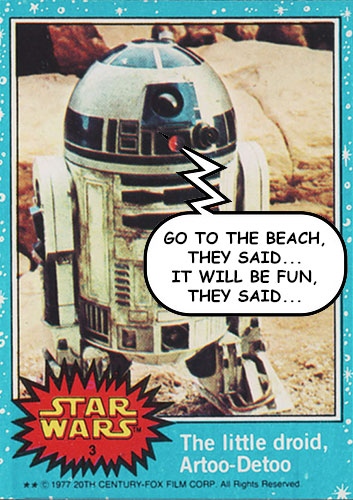 BTW, I’m at the beach now, for real, and it is awesome. But if I see any sharks or Jawas, someone’s gonna get a throat-punch!

NERD ALERT: Revenge of the 5th!

Yeah, OK, so I’m gonna see how long I can keep this STAR WARS fascination going. Maybe until the new movie! Or maybe just until the next sentence falls out of my face. I never really know what’s coming out…

Which reminds me: we don’t really know anything R2D2 ever said, do we? I mean, it’s C-3PO who’s always translating.  Which puts Threepio in a curious position of power… 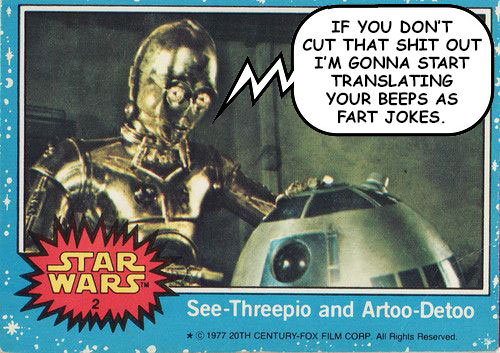 I’m not saying Threepio would, you know, lie or anything. But let’s face it, the dude is an emotional wreck. He’s one oil-bath away from sucking the tailpipe of Luke’s Landspeeder. Or making sweet love to a trash compactor. Or whatever it is that droids do when we’re not looking.

Which reminds me, I better go check on that Roomba…

Like every nerdy kid, I had a big thing for STAR WARS. Having the last name Lucas made me a minor celebrity with everyone I met. Because not only did I have the lauded director’s last name, I had the equally famous NERD-HAIR required of all heroes… 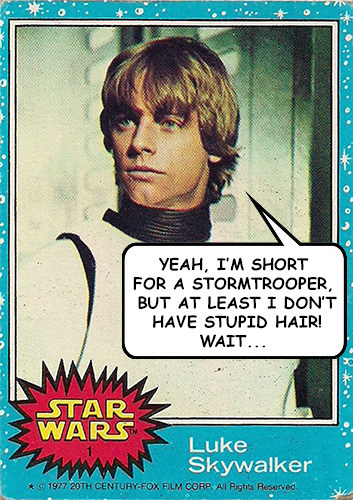 Think about it…
Luke had the short version of Farrah Fawcett’s mop on a bad day.
Han rocked the Scott Baio way before Chachi even knew Joanie existed.
Leia had  those ear-muff hair-barnacles stuck to her head.
And Chewie? That dude was all hair!

I’ll spare you a picture of my nerd-hair at the time STAR WARS came out. Suffice it to say, it was more feathered than Kristy McNichol’s pubes. Yeah, I said that.